Western Fair 2019 Grandstand Concerts Are BACK! 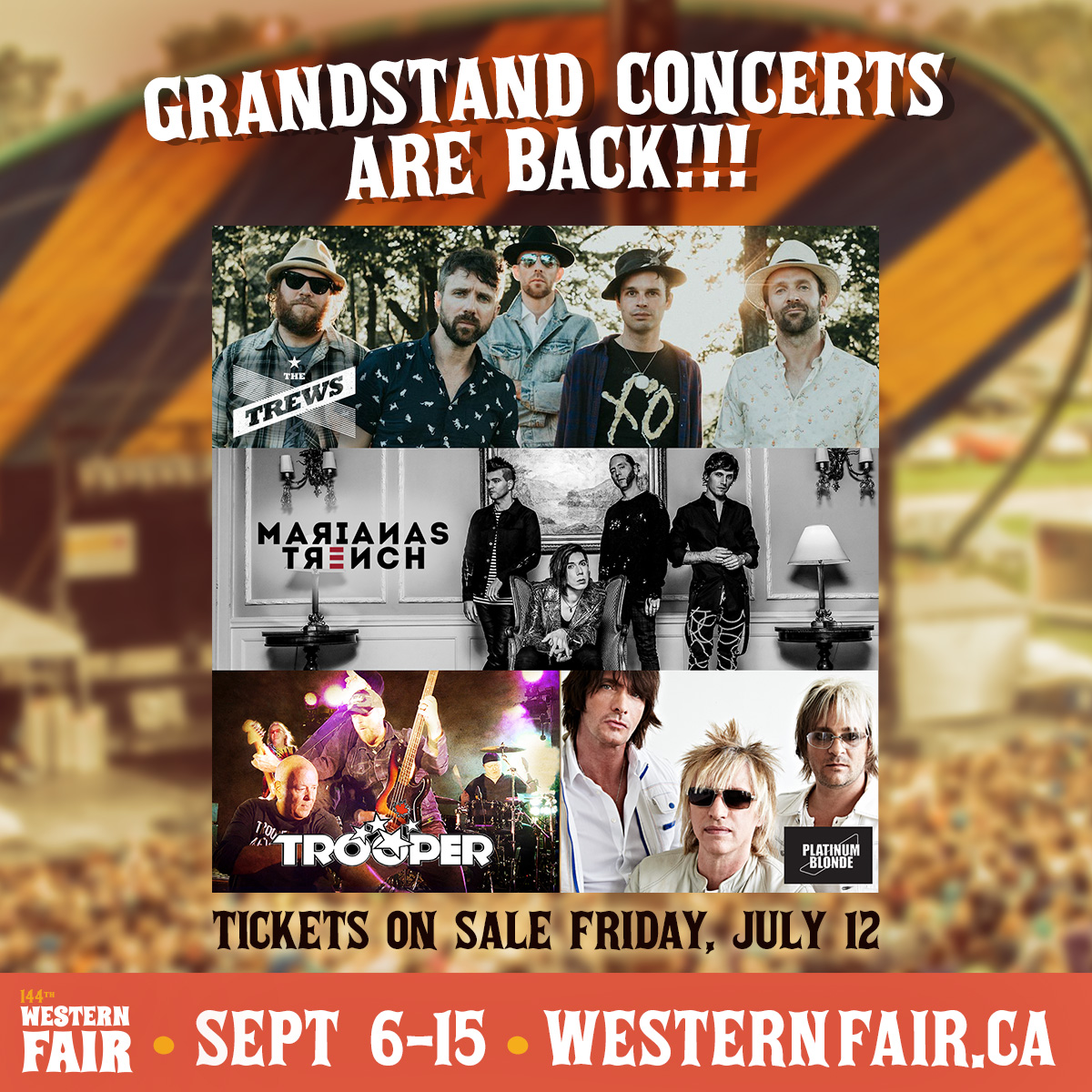 It’s time to open the time capsule - ‘Your Favourites Are Back!’

The annual Western Fair is quickly approaching, reintroducing 144 years of well-loved fair attractions throughout the years while welcoming new favourites. Generations of fairgoers will enjoy the best of agriculture, sports, food, art, music and more. The planning for the September 6-15 event is well underway and The Western Fair District is pleased to kick off the countdown to the fair with the announcement of the 2019 concert lineup, including a variety of Canadian Rock music.

Embark on a trip down memory lane this fall by coupling your top fair eats (like back bacon on a bun) with the fan-favorite anthems of Marianas Trench featuring Virginia to Vegas, The Trews featuring Julian Taylor Band and Co-headliners Trooper and Platinum Blonde - find more information below. Concert prices range from $30-$35 including fees, taxes, and admission to the fair so you can enjoy all the sights and sounds of the fair leisurely before and after the concert.

By popular demand, fair concerts will return to the Grandstand on the Western Fairgrounds. The historic covered, outdoor, venue,  primarily used for live racing, constructed additional stadium style seating this year to enhance guests outdoor entertainment experience at the fair. WFD Director of Marketing Greg Blanchard knows the grandstand well, having spent many years as Director of Racing at The Raceway. “In recent years, we have shifted some of the entertainment attractions back to the grandstand, including the Demo Derby,” Blanchard said. “The grandstand is a nostalgic place for many fairgoers so it’s fitting that we are adding three concerts to the Grandstand lineup this year.”

Advanced tickets can be purchased online beginning July 12 at www.westernfairdistrict.com and are available in person at select Western Fair District locations (below).

Make sure you stay tuned-in each Tuesday throughout the summer as WFD announces which yesteryear events will be returning, new fair attractions to look for, the roster of I Love Local performers and more!

About The Trews: The Nova Scotia-bred, Hamilton, ON-based combo of singer/guitarist Colin MacDonald, guitarist John-Angus MacDonald, bassist Jack Syperek, and drummer Chris Gormley — songwriters all — has won universal acclaim for both their dazzling live performances and wildly accessible songs. The Trews have been one of Canada’s most successful rock bands of the past decade, earning 17 Top 10 Rock radio singles (including two #1’s) and two Gold-certified albums (House Of Ill Fame; Den Of Thieves). The quartet has also received multiple East Coast Music Awards, a CIMA Road Gold Award, an Independent Music Award (US) in 2009 for Best Rock / Metal Song, and numerous JUNO Award nominations.

To date, The Trews have played over 1,000 shows worldwide, on their own as well as supporting the Rolling Stones, KISS, Robert Plant, Guns ‘n Roses, Kid Rock and Bruce Springsteen.

About The Julian Taylor Band: Not a revivalist, but a musical revisionist, Julian Taylor masterfully re-combines and updates the vintage sounds that inspired him, creating bold, innovative songs in the process. Taylor, of both West Indian and Native Canadian descent, is a charismatic frontman, prolific songwriter, and endearing individual – the kind who immediately connects and makes you feel at ease. That character of warmth and generosity permeates everything Taylor does. A calm, somewhat self-effacing person offstage, Taylor morphs into an intense, incendiary and almost shamanistic presence onstage. Toronto poet Robert Priest describes him as “the kind of artist forever in the zone, the voice limitless, the songs full of feeling and memorable hooks.”

About Marianas Trench: Blending the energy and melodicism of pop-punk with theatrical pop ambitions and a progressive rock spirit, Canadian quartet Marianas Trench – named after the Pacific Ocean trench which is the deepest known spot in the world – rose to widespread popularity at the end of the 2000s thanks to platinum-selling concept albums like 2009’s Masterpiece Theatre and 2011’s Ever After. With an increasing trend toward thematic grandeur and a growing worldwide audience, the Vancouver band continued to expand both their sound and commercial reach with the ’80s adventure film-themed Astoria (2015) reaching number two at home and gracing Billboard’s Top 200 in the U.S. The album’s success also led to a 2016 Juno nomination for Group of the Year. The non-album single “Rhythm of Your Heart” was released in 2017, followed a year later by “I Knew You When,” which offered fans the first taste of their fifth album, Phantoms, released in March 2019.

About Virginia to Vegas: Virginia to Vegas, aka Derik Baker, is an American-born Canadian singer-songwriter. After being discovered on YouTube, Baker was signed to Wax Records in 2013 and released his first single “We Are Stars” January of 2014. Baker is best known for his indie-pop choruses and sticky electronic melodies, which have awarded him critical acclaim and several platinum certifications. In 2018, Baker expanded his reach internationally, co-writing the single “IDWK” with Blackbear and DVBBS. Virginia to Vegas recently dropped his EP Hartand St., which includes the new single “Just Friends.”

About Trooper: Millions of records, a couple dozen hits, a Juno Award (Canada’s Grammy) for Band of the Year and ongoing sold-out shows across Canada. Universal Music acknowledges them as “one of Canada’s top five selling bands of all time” and the Vancouver Sun has called them “Canadian rock heroes of the first order … the best performing band in Canada.” Trooper’s ten studio albums have earned multiple gold and platinum awards and their 6 X Platinum greatest hits, Hot Shots, continues to be one of Universal Music Canada’s bestselling catalog CDs and one of the country’s most enduring party soundtracks.

We recommend listening to: “We’re Here for a Good Time (Not a Long Time)”, “Raise a Little Hell”, “The Boys in the Bright White Sportscar” and “Two For the Show”.

About Platinum Blonde: Platinum Blonde was formed in Toronto, Canada in 1982 between the end of the disco boom and the beginnings of glammy hard rock. New wave was in its commercial glory and bands like the Police, Duran Duran and Billy Idol were combining fashion and sound to cash in on the new art form of music video. Vocalist Mark Holmes, guitarist Sergio Galli, bassist Kenny MacLean and percussionist Chris Steffer were Canada’s answer to those bands. In 1983, Platinum Blonde released its debut album, Standing in the Dark, for Epic Records Canada. That album and its singles, “It Doesn’t Really Matter” and “Standing in the Dark,” became instant hits in Canada and attracted attention south of the border. Platinum Blonde became overnight sensations and helped put Canadian rock on the scene. Many years later, they have returned to the stage - enjoy their unique sound during this year’s fair!

Tickets are also available in person at Western Fair District. Call or email for ticket locations: (519) 438-7203, EX 0, or cexperience@westernfairdistrict.com

London, September 4, 2020 – The first ever virtual Western Fair is now just a week away from kicking off and organizers are looking forward to keeping the fair’s spirit alive through a combination of augmented reality (A.R.)...

AUGMENTED REALITY A PART OF FIRST EVER VIRTUAL WESTERN FAIR

Organizers of the annual Western Fair are keeping the spirit alive this year by bringing the Fair to the people! The physical event was cancelled this year due to the pandemic, however the first ever virtual Western Fair will take place from September 11-20 and...

5 reasons to participate in this year's Creative Arts Competition

Calling all crafters, artists and DIYers! This year’s virtual Creative Arts competition for the 2020 Virtual Western Fair is open, and we can’t wait to see your submissions. While we’d love to have you at our physical Fair, the Covid-19 cloud rained on that parade, so we’ve...

Hey London - Will You Spy Pie Before #WesternFair2019?!

Will you spy the pie before the Western Fair?! Finders keepers! Celebrate the yesteryear favourites returning to the Western Fair menu by keeping your eyes on the prize - prized pie that is - with the I Spy Pie contest! 1st place cardboard cut-out pies (above) are hidden at various...

Keep Your Eyes on the Pies Starting Monday, August 26th we'll be hiding these pies throughout London, posting clues to their locations along the way! If you spy a pie, take a photo & send it our way to claim your prize of 2 SuperPasses to Western Fair 2019.  RULES 1. You...