MacDonald Returning For Molson Pace (May, 2014)

A very familiar and former leading driver at The Raceway at Western Fair District is coming back to London for the Molson Pace. Mark MacDonald has been one of North America’s top pilots for a number of years, but he’s never captured the prestigious Molson Pace.

“I’ve been in The Pace with some very nice horses,” he says. “Tigerama set the track record there (1:50.4 in 2008) in his elim, but he drew the outside post in the Final and things didn’t work out.”

“I finished second with Dr No to Our Lucky Killean and I’ve been there with Sand Olls Dexter… Having lived in London and driven there lots - it’s just one of those marquee events that a guy like me would love to win.”

There’s a ‘tank’ of a horse, out of Delaware, that goes by the name of Bandolito, trained by Daryl Bier. He’s a handsome son of Ponder and MacDonald has yet to sit behind this ’tank’, but he’s very familiar with the Ponder family.

“I know them well,” he states. “I’ve driven Ponder and I’ve driven his stakes champ son’s Thinking Out Loud and Bolt The Duer – they’re both world class and I think Bandolito is soon ready for his coming out party too. He hasn’t beaten the big boys yet, but The Pace would be a nice spot to start.”

Bandolito is a lightly raced 4-year-old with just 19 career starts, but he has 13 wins, a mark of 1:48 F and he’s banked over $250,000. Charles Dombeck, Dave Bier and trainer Daryl,Bier all share in ownership and they’ve recruited Mark MacDonald to pilot this speed demon is this year’s edition of the $150,000 Molson Pace taking place Friday, May 30.

“I was at Yonkers watching a race from Dover, in April, and I was like ‘who is this pacing out of his harness?’”

So we know Bandolito has crazy good speed over the ⅝ oval’s, but how will he respond to his first test over the half miler?

“He’s a very slick pacer and he doesn’t wear a boot,” says MacDonald. “His speed is just crazy… These would be big shoes to fill, but he goes along like Riyahd. The only thing I can say is this is a serious horse!”

The world Champion Riyahd was a front end/half mile track specialist back in the day. Many that have seen Riyahd may agree with MacDonald that Bandolito does, in fact, look similar to Riyahd when he rolls along on the lead.

“We’ll see how he draws and go from there,” added MacDonald. “I know he’ll be a serious contender… I know he’s ready to dance with the big boys…”

Michael Glew (The Raceway’s Guest Handiapper) 3 BANDOLITO - Battling some incredible horses here, but he’s getting better and more experienced with each start. The torch will be passed to him!

Roger Huston (The Meadows/Little Brown Jug Announcer) I like Foiled Again from any other post… so my pick is 2 BETTORS EDGE.

Ken Middleton (Woodbine/Mohawk Announcer) 1 STATE TREASURER - Defending Molson Pace champ enters this assignment brimming with confidence and gets the coveted pole position to work from.  He’ll be tough to beat.

Mike Hamilton (WEG Broadcaster/Handicapper) State Treasurer is a “no-brainer” pick, last time he was on a half (2013 Gold Cup & Saucer Trial) he made a break from the rail. If any horse can survive being parked the mile, and still win this race, its 7 FOILED AGAIN. He’s my pick!

Greg Gangle (WEG Broadcaster/Handicapper) 1 STATE TREASURER - Can’t see him letting anyone take command in the mile and he’s never been better in his career.

Shannon ‘Sugar’ Doyle (The Raceway Announcer) 3 BANDOLITO - If he makes front it could be lights out for the rest. *Crazy good stat - this horse does not like to get passed… It’s only happened once in his career.

Greg Blanchard (The Raceway Manager) 4 APPRENTICE HANOVER - World-class speed, top connections and a good post could add up to a Molson victory.

Bob ‘Hollywood’ Heyden (The Meadowlands Broadcaster/Handicapper) 4 APPRENTICE HANOVER - His move at Yonkers in the Levy Final to get second was out of this world. The way the draw worked out - this is definitely a closers race and plays right into his hands.

Gord Waterstone (Associate Editor at Horseman Publishing, Lexington, Kentucky) 5 DANCIN YANKEE - In career-best form and comes off a world-record effort. I’m jumping on the bandwagon that should continue to roll.

Dave Walls (Hiawatha Park Announcer) 2 BETTORS EDGE - Has had tough trips and interference in a 4 of his last 6 miles.  He has made front in 10 of his last 20 starts and if he can find a better trip tonight he might just overshadow his famous stablemate at a solid price. 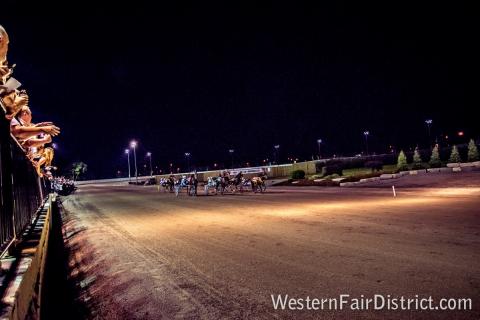 A little trivia here… What free-legged pacer once had the nickname ‘Recall Hanover’ - among horse people - around the B-tracks of Ontario? Keep reading along for the answer... I spotted a beautiful photo of a veteran racehorse, on Facebook, this past week and then reached...