A little trivia here… What free-legged pacer once had the nickname ‘Recall Hanover’ - among horse people - around the B-tracks of Ontario?

Keep reading along for the answer…

I spotted a beautiful photo of a veteran racehorse, on Facebook, this past week and then reached out to his owner Jansen Sweet to talk about this former Ontario pacer - now getting set for his 13-year-old racing season in Prince Edward Island.

Shiftyn Georgie (Rambaran-Paradigm Shift-Camluck) was bred by Ailsa Craig’s Rick Heamen and he’d make his first career start back on July 18, 2010 at Clinton Raceway - where he’d try to go all the way, but just miss by a head - finishing second with Alfie Carroll aboard in 2:00.2… It’d be one year later when Shiftyn Georgie would pace to his lifetime best of 1:56.1 over Woodstock (July 15, 2011), circling them 3-wide, with Billy Davis Jr. in the bike… Now this horse must have a thing for the warm month of July, because last year - at the age of 12 - this old campaigner would roll gate-to-wire over the Summerside, P.E.I. half-miler (July 9, 2019) to match his lifetime best - winning easily in 1:56.1 - with Marc Campbell driving.

“That was a big trip,” says co-owner Jansen Sweet. “And he’s much better behaved now than he used to be… He’s a little more relaxed, than when he first came to us, that’s for sure. He jogs with no gear on - getting lead along behind another horse and jog cart - he’ll follow along nice and easy for around for 4 ½ miles…”

The Charles F. Willis Memorial Raceway, in O’Leary, P.E.I., is where Georgie now calls home. I know the track well. It opens for matinee (non-betting) harness racing through the summer months and it happens to be both the spot where I drove in my first amateur race and where I began calling races too…

“They used to call him ‘Recall Hanover’ because he’d cause recalls at the summer tracks, in Ontario, but he’s been good here,” says Sweet. “He’s well-mannered all around - very easy going around the barn, when he’s jogging and when he gets turned out, but when we put the bridle on him - he gets his game-face on and he knows it’s time to go to work. He turns it around then.”

Sweet’s brother, Jaycob (18), does the conditioning and he was able to pick up his first career training win with Georgie just one year ago (May 20, 2019) at Summerside. “Jaycob had a great rookie season picking up the top trainer title at Summerside’s Red Shores track. He works hard and puts a lot of time into it,” says Sweet. “If he’s not working with our horses, he’s usually training someone else’s or he could be out there dragging the track. I believe he’ll be aiming for his harness driver’s license late this year.”

For Georgie there’s been no regular pilot, in the sulky, since moving east. I’ve counted 11 different drivers on board for his 40 Maritime starts. “He’s almost better if we switch it up,” mentions Sweet. “Jason Hughes has always driven most of our horses. Marc Campbell matched his life mark. And then Dale Spence won 3 in a row with him last Fall,” continues Sweet. “He’s not a real tough horse to drive. He can leave really good - that’s usually the game plan and if they don’t get to him around the three-quarters - he’s usually good to go.”

A mid-summer purchase for ‘about’ $3,500 in 2018 - Georgie would take to his new P.E.I. surroundings right away… “We originally bought him for the $5,000 Claiming Series at Old Home Week,” he says. “We raced him in Summerside and he won his first start for us in 1:58.1 and then we thought - maybe we shouldn’t have put him in that claiming series - we liked him that much… Well he was already in to go 4 days later in Charlottetown - so off we went… He did end up getting claimed off of us, during that series, but we’d take him back in the final and he’s been with us ever since.”

The ownership crew of Jansen, Allison Sweet, Brody Ellis and Susan Thompson also own another former Ontario pacer in Rising Fella - once campaigned by trainer Bob McIntosh. “He’s done well for us too. We keep a small barn, but we have a lot of fun racing here on our island tracks.”

Earning $8,500 is a good season for any race horse down east as the costs aren’t as great… “We had a pretty good year all around,” offers Sweet. “Georgie made the most, last season, so he earned the number one stall, in the barn, with a window view… He doesn’t need the vet much and he gets turned outs lots too - I know he got lots of turn-out time in Ontario, but I think he’s taken to the P.E.I. air - they say it can turn them around…”

So what’s the game plan for Georgie’s upcoming season? “We’ll race him a few times and see where he fits… He’s got the age and the ugly ankle factor - so that keeps him pretty safe around the $4,000 claiming level. We’ll see how he comes back to the races, but he has trained down well - better than Rising Fella actually.”

There’s a pretty good chance you’ll see Shiftyn Georgie in action on the opening weekend for P.E.I.’s return to racing in early June. “He’ll be ready,” confirms Sweet. “We’ll qualify the end of May and hopefully we’ll get him in to race when Charlottetown opens up.”

Shiftyn Georgie was able to go over $100K in career earnings, last Fall, for his P.E.I. connections.

- His richest career win would come in a $9,000 purse event (NW $30,000 Lifetime), at The Raceway, in October of 2012. Racing for trainer Murray Preszcator, at the time, driver JR Plante would guide him to a 1:56.2 victory over a track rated 2 seconds off - winning over General Manager (Trevor Henry) and Southwind Whiski (Alfie Carroll).

- His final Ontario start took place at Hanover Raceway on July 21, 2018. It would be a sixth-place finish in a $7,000 claiming event, for trainer Natalie Baumlisberger, with Bruce Richardson aboard. 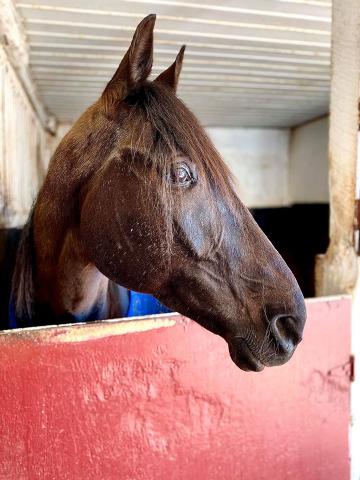 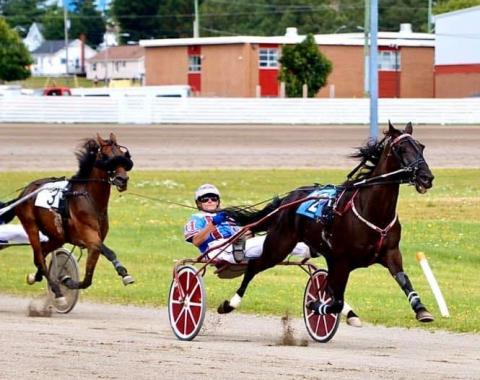 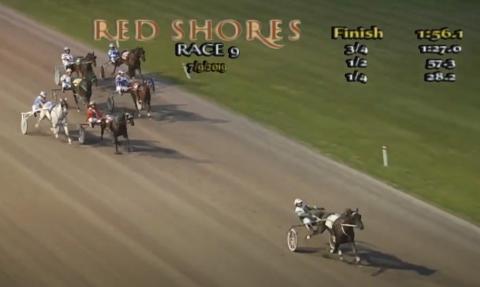 Off And Pacing... Soon - hopefully!

"Harness racing has a short window to reinvent itself and become relevant again - in a way that hasn’t been seen for many decades. The status quo will not be sufficient to capture this opportunity when racing returns,” says horse owner/game designer Ryan Clements. “I think...