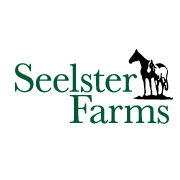 Seelster Farms, established in 1969 and one of North America’s leading breeding farms, has entered 31 yearlings for the London Classic Yearling Sale in October.

“My overall feeling is that we have a strong consignment,” says Seelster’s Reproduction Manager Ann Straatman. “The full and half siblings are starting to surface on the racetrack and some are doing quite well. We’re just very happy with our offering, this year, for London.”

It’s early in the Ontario stakes season, but one rookie pacer has already caught the attention of many for his winning prowess. Stockade Seelster is an impressive 2 for 2, thus far, winning both of his $101,300 Ontario Sires Stakes Gold events at Woodbine Mohawk Park in 1:51.3 and 1:52 respectively for owners Sally and Paul MacDonald. Trained by Dr. Ian Moore and driven to win by Jody Jamieson - the son of State Treasurer was a $45,000 yearling purchase last Fall in London.

His younger sister, Sorcha Seelster, will most certainly catch many eyes in October…

Straatman took some time, from a busy day, to offer up info on a few of the Seelster offerings this Fall.

2. Liege Seelster is a Bettors Delight half-brother to Thinking Out Loud ($1.95M, p1:47.2m), West Of L A ($257K, p1:53.2m at 2), You See L A ($249K, p1:52s at 3… “I do a have a sentimental pick, this year, in Leige Seelster,” she says. “He’ll be the last foal for Los Angeles as she passed away, from heart problems, when this colt was five months old. We just couldn’t save her… And like his pedigree - he’s big and strong. There’s just so much black type everywhere along on his pedigree and there’s been plenty of talent for both the colts and fillies from this mare. We’re really going to miss her for sure.”

4. Arebesque Seelster is a State Treasurer full-sister to Alumni Seelster ($214K, p1:52.2s at 3)… “She’s almost a copycat of Alumni Seelster,” she says. “And she comes from a fine filly-producing mare. This is definitely a ‘filly family’ and we’re hoping this one carries on with the trend.”

Touching on their ‘first crop racing in 2002’ stallions - All Bets Off and Lookslikeachpndale… ”Both have multiple Gold winners, in Ontario, so we’ve seen some very strong competitors already,” says a pleased Straatman. “Their offspring are racing the best right now and winning - so it’s hard not to be excited about these two sires… We’re all very impressed!”

There’s been plenty of Bulldog Hanover hype in recent weeks. The Shadow Play four-year-old was an amazing 1:46, 1:46.1 and 1:45.4 (world record) winner, through the month of July, at The Meadowlands and with him being added to the stallion roster, at Seelster Farms this season, it’s likely to get very busy at the Lucan, Ontario-based farm.

“It’s such a privilege to be involved with Bulldog Hanover,” Straatman says. “We loved him during his first breeding season and when you look at what he’s done on the racetrack this year - it’s just a dream come true for everyone involved. For both Brad Grant and Jack Darling - what a great story! Jack picked him out and got him to the races and to see him pace in 1:45.4 - just incredible! And his groom, John Mallia, can take a bow… This is a big powerful animal and he’s a happy and healthy animal… John deserves a lot of credit in all of this - he’s kept him safe.”

Straatman’s thoughts on ‘The Bulldog’ as a sire… “We couldn’t be more thrilled for those breeders who gave him a shot this season. He was a great horse in 2021 and he came back every bit as strong and now he’s the fastest pacer the world has ever seen… Personality-wise he’s very smart and he looks after himself. He loves to do everything and he loves a good banana too - that’s his favourite treat!” she offered up. ”And both Jody (Jamieson) and Dexter (Dunn) have said that he just doesn’t get tired so we’re hoping that he can pass that along… That could be a real game changer in harness racing!” 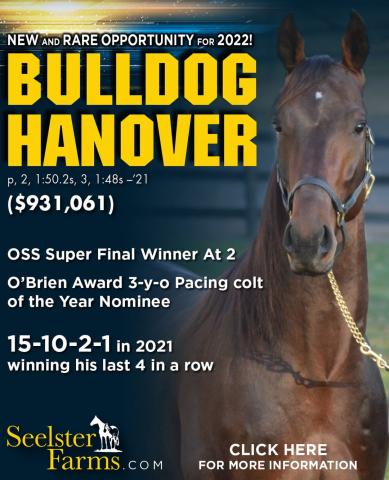