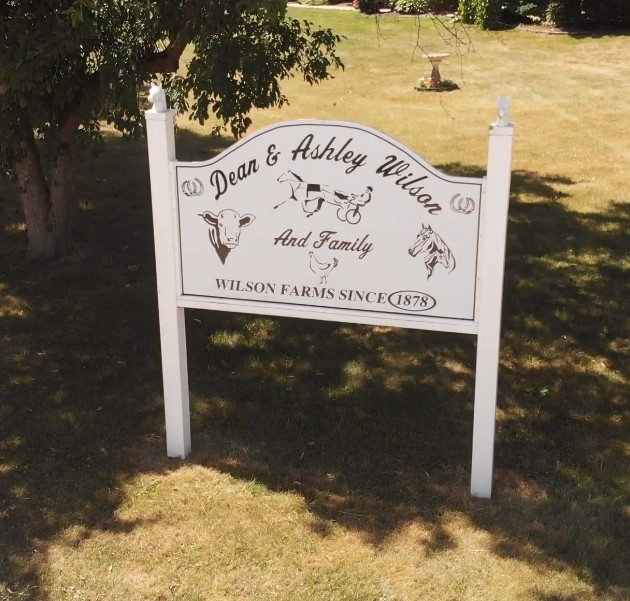 “Getting yearlings ready for the sale is a lot more work than people would expect, but I think it pays off when they look good and behave well at the venue,” says breeder Ashley Wilson. “We teach them to tie and pick up their feet and stand quietly to be brushed… We’ll teach them to stand and square up for when they get inspected, by potential buyers, at the sale… They get turned out daily to run and build up muscle. We have fillies that still go together, but all the colts will go out alone now - so they don’t leave marks on one another… It’s kind of painful to watch a horse that was just rubbed spotless and is now glistening go out and roll in the dirt, but you need to keep them happy and have them outside as much as possible… When it’s warm they’ll go out at night and during the day they’ll be inside and out of the sun… Once it cools off, in the Fall, we’ll have to switch back to coming in at night - so they’ll not grow a thick coat. We’ll be doing some paddock videos soon and a lot goes into producing those… All the yearlings will get front shoes, bathed and clipped. It’s a lot of ‘hands on deck’, for those days - especially video day, but the end result is always fascinating and rewarding. We have a great group of girls helping us get these yearlings ready this time around… They’re all are very confident in what they do and have worked with yearlings before - it’s just a huge blessing to have such good help as we could never have handled this many yearlings on our own - like we’d have done in the past - when we were a smaller consignment…”

Dean and Ashley Wilson operate Wilson Farms (established in 1878), with their family, in Kerwood, Ontario. It’s truly a very busy time for Dean and Ashley, but they were able to break away, briefly, to share some thoughts on their ‘D A offerings’ and more for this Fall’s London Classic Yearling Sale.

“We are very excited to be back at the (Western Fair District) Agriplex this year,” mentions Ashley. “The London Virtual Yearling Sale did a very good job running a sale during the pandemic and our yearlings sold well… We were very appreciative of everyone that made a trip out to our farm to see our horses, but nothing beats a sale atmosphere and I’m sure the buyers are very happy to be coming back in person… And it’s great to see this upcoming sale will be during the week too - that was great planning!”

D A PAC MAN is a Hes Watching first foal from a full-sister to Twin B Spy ($173K, p1:52f)… ”He’s the smallest of our yearlings, but he’s correct and has a strong build. We liked his mother as a yearling.”

D A MAGIC MIKE is a Mcwicked half-brother to D A Temptation (p1:57.1f at 2 in first start)… “He’s been the one that catches your eye, in the group, from the start. He’s the boss, of his group, even though he wasn’t the biggest. Well-built and correct.”

D A BIG DEBUT is a Big Jim filly and third foal from a sibling to six $100K+ winners… “She’s a long and tall filly. Racy looking - clean correct legs. She’s the boss of all the fillies and she loves her food!”

D A ALICE is a Muscle Mass filly and first foal… “She’s the eye-catcher in the herd! Beautiful head, solid/strong filly, clean legs, correct. This would be Dean’s favourite filly…”

D A WICKED SHINE is a Mcwicked half-brother to Risenshine Seaside ($101K, p1:51.2f at 3)… “This is Ashley’s favourite colt! A good size and correct, he’s the colt that always wanted the attention when Ashley fed his group. The Wilson’s love to follow his brother’s races.”

The Wilson’s also own half of MASSTERCRAFT, a Muscle Mass colt from Pretty Crafty… “Strong race family, full-brother to Publicity Seeker and Stable Genius (who is just getting going). A half-brother to two other $200K earners. He’s correct and likes to get going.”

Ashley also touched on a few others… “There are some stand out yearlings - that we have raised and are selling in London as well… CAPODIMONTE is a Mcwicked colt - out of a fast Captaintreacherous mare with a strong family. Good looking individual and first foal. He should get some interest. ILLICIT AFFAIR is a McWicked colt - out of Rockumentary who has already produced Cusdmagicdragon ($352,506, p1:52.2f) - a top filly from out west and This Dragon Rocks ($343,376, p1:51.2s) so far. He was in the youngest group of colts and he always caught my eye and has really blossomed lately.” 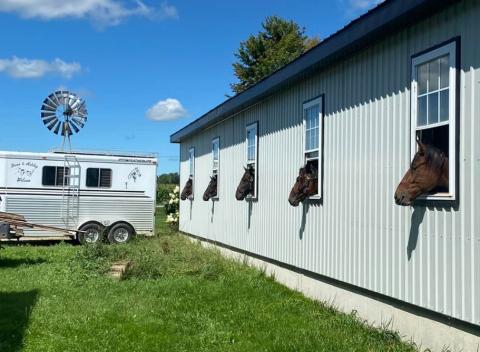 The ‘D A boys’ relaxing…