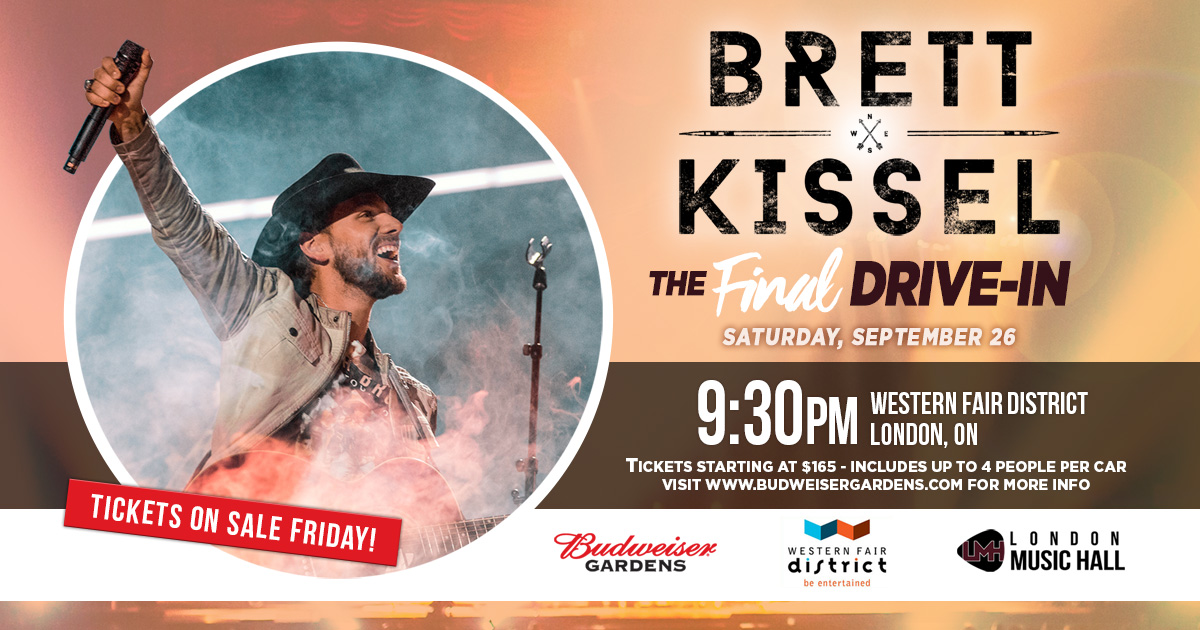 London, Ontario – London Music Hall, Budweiser Gardens and Western Fair District are proud to announce that multi Juno and Canadian Country Music Association Award winner Brett Kissel will be headlining at the Western Fair District on Saturday September 26th! Tickets for the event go on sale Friday, September 18th at 10am on budweisergardens.com

Brett Kissel is constantly exploring new ideas, while never forgetting what he does best. It’s an approach that has propelled him to the top of Canadian country music, with two Gold certified albums, a Platinum and eight Gold singles and 15 top-10 radio hits to his credit. 2019 was his biggest year yet, winning the JUNO Award for Country Album of the Year and earning the Canadian Country Music Association’s Fans’

Choice Award, following a record-breaking 112-date tour that reached every single province and territory. The Canadian Press crowned him “The New King of Canadian Country.”

Although some artists might see these accomplishments as a cue to hit cruise control, for this proud husband and father of three, it has only added fuel to his fire to give his audiences more, and to expand his musical vision. That’s precisely what he’s done on his latest album, “Now Or Never.”

“I am beyond thrilled to come to London, Ontario on September 26!“ says Kissel. “London holds some of the best country music fans in Canada, and some of my greatest career memories have been made with the fans there that have come out to the shows – I can’t think of a better place to bring my drive-in show to party! I’m not saying I’m saving the best for last, but, after doing 22 sold out drive-in shows across Canada, it only seems right to do one final stop in one of my favorite cities in the world!”

On sale Friday, September 18 @ 10AM EST at www.budweisergardens.com

* Prices include up to 4 occupants per vehicle.