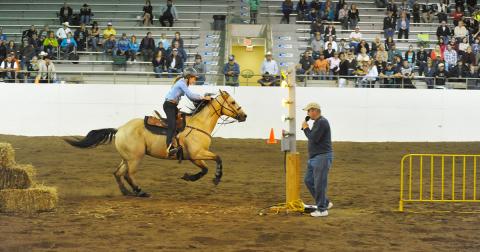 Western Fair District along with Mid Western Ontario Horseman’s Society hosted the all breed horse show the closing weekend of Western Fair.  Show started Friday, September 14 and concluded Sunday, September 16. In total 126 horses showed in various speed and performance events. A total of $4270.00 in prize money was awarded to the top six placings of each class. Photos from the weekend will be available from Lone Oak Equine Photography. Photos may be previewed at loneoakequinephoto.com

Purina Agribrands sponsored in part the Purina Barrel Stake class which was the held at Sunday evening show. Mid West was also fortunate to receive a $500 sponsorship from AQHA/CQHA which was split between the barrel stake class and western pleasure stake class. The AQHA/CQHA added money was payable to the top four winners of each stake class who were AQHA members.

The winner of our Ranch Riding class held Friday evening was won by  Shelley Thomson riding Taylored By Tabu. Shelley was presented with a blanket provided by Ken and Glenda McLellan.

The winner of our Trail class held Sunday morning was Ken O’Donnell riding BSB Dont Ask Me. Ken was presented with a stall bag provided by All Trail Breed.

The winners of the T shirts donated by Kicking Cowgirl were Cadence Nelson and Tiffany VanDenBerg.

Also, worthy of mention were the 19 ponies who entered the show. WOW, what a sight that was to see when they all entered the ring after the keyhole class to be presented with gift bags provided by Jim and Shelley Thomson as well as apple treats provided by Avon Feeds.

Many thanks go to our sponsors: Western Fair District for supporting the show, Purina Agribrands for sponsoring in part the Barrel Stake class, AQHA/CQHA for sponsoring in part the top four AQHA members who were winners of both barrel and western pleasure stake classes, Ken and Glenda McLellan for award for Ranch Riding class, Re Ride for two $50.00 gift certificates for Stake class winners, Avon Feeds for providing apple treats which were given out to various exhibitors. Also, Kicking Cowgirl for two T shirts which were presented to first place in Western Pleasure and Division 2 Keyhole. We would also like to thank Parkway Gardens for donating the beautiful fall planters.  Big thank you goes to Ken O’Donnell & Ben DeBrouwer for providing the trail equipment for our trail class. Also thank you to All Breed Trail Challenge for added money to our Trail class as well as a stall bag. The continued support of our sponsors is greatly appreciated.

Last but not least, we thank all of the exhibitors who participated in the show and the many volunteers who made this show such a great success. We couldn’t’ have done it without you.