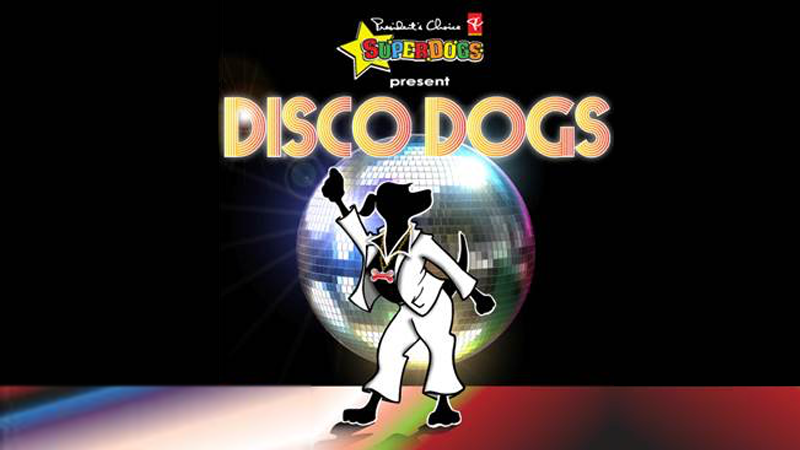 Performing at the Western Fair District on April 25.

The President’s Choice SuperDogs are letting loose and going disco in their brand new, boogie-filled, superfly spectacle, DISCO DOGS! It’s a no-holds-barred celebration of disco music, new and old, from Donna Summer to Daft Punk, with colourful new costumes, exciting new events, and all the fun audiences have come to expect from the world’s most amazing dogs.

Watch and cheer as the sensational SuperDogs jump, weave, leap and even dance to electrifying disco hits! Plus see them put our new “Dog Speech Translator” to the test, witness hilarious new feats like the “Remote Control Dog,” and play audience-interaction games like “Are You Smarter Than a SuperDog?” And keep the party going after the show by joining us on the dance floor to boogie, meet the stars for Pat N’ Chat, and get some amazing gifts and coupons from President’s Choice Nutrition First dog food—the official fuel of the SuperDogs.

DISCO DOGS is the latest in a series of spectacular SuperDogs productions, including Wild Wild Woof, Hip-Hop Hooray, The Wizard of Paws, and more—that have headlined such international events as The Calgary Stampede, The Canadian National Exhibition, The Pacific National Exhibition, and America’s Family Pet Expo. Building on the success of these shows, DISCO DOGS celebrates good times with a captivating new production that will have audiences of all ages laughing and cheering.

For the past four decades, The President’s Choice SuperDogs have entertained over 35 million people with some of the most original family-oriented live shows around! And it just keeps getting better! Fast paced, interactive, heart warming and hilarious, experience the fun of these canine dynamos in their incredible new production, DISCO DOGS!

You can catch the SuperDogs performing  DISCO DOGS on April 25 at 2:00 p.m. and 7:00 p.m. For ticket prices and more information, visit http://www.westernfairdistrict.com.