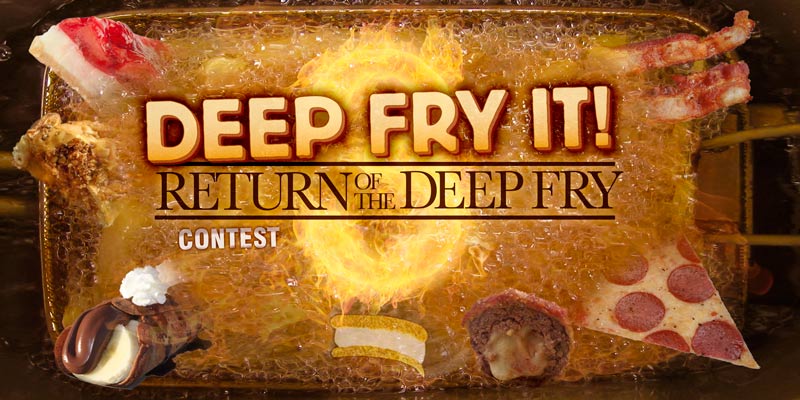 Unusual and crazy fair food adds to the allure of things to experience at the fair.

London, Ontario, August 26, 2014: Food is a highlight for many who attend the annual fair.  Fans can taste iconic favourites and trending concoctions, it’s all there waiting for mouths to water and stomachs to be filled.  Just as midway rides call the adventure seeker, the smells of frying onions and batter, melting sugar and savory sauces dare foodie fairgoers to try-me.

Pies and fairs have a long history together. Traditionally, pies were a main component of the fair’s domestic science competitions, prize money and shiny ribbons awarded to the top tarts. Then church booths and women’s institutes entered the picture feeding fairgoers with homemade pies.  Funds raised supported community organizations and the competitive spirit was evoked once again, as booths with the best pie, by reputation, sold out first.  Pie booths and baking competitions have slowly made way for food trucks and culinary demonstrations, but this year Western Fair begins a slice of pie revival with a new pie variety offered every day of the fair!  Try them all or come for your favourite.  A la mode, or on its own, there is an element of entertainment in every slice.  Follow your nose to the Country Kitchen located inside the Progress Building.

Londoners have been helping Western Fair choose deep fried favourites for the last three years.  Winners voted on by the public have been 2012’s Deep Fried Butter Tarts and Wagon Wheels, 2013’s Deep Fried Bacon Wrapped Jalapeños Stuffed With Cream Cheese, and Chocolate Turtles and 2014 submissions have been narrowed down to ten finalists with winners announced this Friday, August 29 :

Elvis Presley’s Favorite Grilled Cheese - A tribute to The King himself, this fried melted sandwich comes packed with all of Elvis’ favourite foods including Cheddar cheese, peanut butter, banana slices and bacon.

Bucket o’Cookies - A dozen mouth-watering chocolate-chip cookies in a classic Western Fair logoed tin pail, is a fantastic treat for the family or a group of friends, and a terrific take-home bucket momento for you!

Pie on a Stick – In keeping with our Ten Days of Pie theme, you can try a slice of Apple Pie on a stick, dipped in batter and deep fried.

Bacon-Chili-Cheese-Pogos on a Bun – Explains itself!

Quebec Curds’ Poutine - Made with real Quebec cheese curds, no shredded cheese here! The real deal and a Canadian classic.